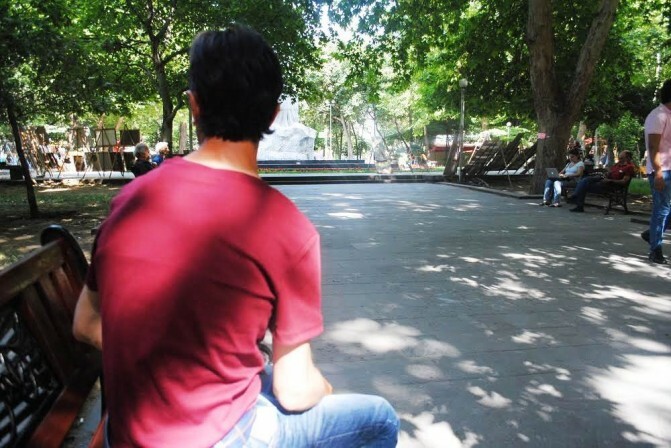 “In the yard of the detention facility there is a 12-seat toilet, every day the convicts were having sex there, they took gays there by force and …” says 31-year-old Gor, who was released from the detention last year. His reminiscences are still fresh. Gor (the name is changed) is a gay. In the Penitentiary Institutions (PI) where Gor has served his sentence everyone was aware of the young man’s sexual orientation. “People think if you are a gay, you must have sex with every man that wants to, but I had sexual intercourse with only one man, our relationship lasted 9 months, I didn’t have sex with anybody else in the prison, though I was enforced many times,” Gor tells.

The boy grew up in one of the orphanages in Yerevan, further he was adopted by a family from Shirak marz. After becoming an adult, Gor left for Turkey, where he worked as a waiter. In 2007, after returning Armenia, he was sentenced to 7 years of imprisonment on the charge of committing murder and theft. Gor claims he is not a criminal, he was “lured into a trap”, as they knew of his sexual orientation. “I didn’t have a life … I don’t know who my real parents are, my privte life developed this way, then I was sentenced for 7 years for nothing… every time I remember these years, I want to hang myself,” Gor says to “Medialab”.

During these 7 years the young man managed to be in several PIs located in Artik, Sevan, Kosh, Nubarashen. As Gor says, the attitude towards gays is almost the same everywhere; if you’re a gay you should be ready for the most cruel treatement and humiliations. “They wanted to make me clean the toilet, but I didn’t obey, for that I was beaten up, then I called to the Ombudsman’s Office, they addressed my problem and, after that, they let me alone,” Gor tells.

Gays are provided with solitary cells in PIs for their safety, though this does not guarantee that convicts shall not face sexual violence and abuse. “The “good guys” of the zone give a criminal administration servant AMD 1000-2000 to bring one of the gays to their cell, and if the latter doesn’t want to, they take him by force. They do with him whatever they want, and then the servant takes the gay back to his cell. The servants give a green light to prisoners, they allow them to do with us whatever they want,” Gor tells.

His words are approved by Sergey Gabrielyan, Head of the “New Generation” Humanitarian NGO and by Arman Sahakyan, Coordinator of the Diversity Promotion Projects of the NGO, who have been members of the Group of Public Observers conducting monitoring in the Penitentiary Institutions of the Ministry of Justice of the Republic of Armenia since 2013. “Just the fact of being a gay is enough itself for prisoners to swear the gays and their parents, and remain unpunished,” Sergey Gabrielyan says to “Medialab”.

As Sergey Gabrielyan notices, in Penitentiary Institutions gays are enforced to do the most dishonorable work. Moreover, a sentenced gay has to clean not only the toilet in his own cell, but also the toilets of other cells. “Gays do not have the right to use the common cafeteria, their usensils are distinguished with special marks. There is also the opposite variant: there is a PI, where the prisoners refused to go to the cafeteria, as a gay had already been there,” Gabrielyan notes.

Arman Sahakyan observes that the discriminatory treatement towards gays is obvious not only from abusive labels used by the employees of PIs, but also from their living conditions: “Cells allocated to gays differ from other cells – the property is wօrn out, there is no heater and the linen is dirty,” Sahakyan says to “Medialab”.

Observers note that gays in PIs are usually reluctant to complain about abuses they faced, but they tell terrible cases related to other gay convicts. “When we exhort a gay convict to file a complaint trying to defend his rights this way, he says he doesn’t want, he needs nothing but to get out of that hell. They have calendars and they mark the days off waiting impatiently for the day they are free,” Sergey Gabrielyan says.

The former convict Gor says to “Medialab” that he also didn’t want to file a complaint on violences against him. “I was beaten up by 4-5 people, because I didn’t agree to have sex with someone I didn’t want to. My appearance obviousely showed that I was beaten up, but I didn’t complain, neither the employees asked what had happened to me,” he tells.

Arthur Sakhunts, an expert and a human rights advocate of the Goup of Public Observers, notes that the attitude towards gays in detention facilities doesn’t differ from the general tendency in society. Pursuant to the World Value Survey (Database 2010-2014), the highest level of intolerance in Armenia is 92.7% for gays, people suffering from AIDS are in the second place – 76.9%, representatives of other religious organisations are in the third place – 56.6%. “The model existing in the society is the same as in detention facilities; the difference is that in close institutions it is more concentrated and obvious,” Sakhunts says to “Medialab”. The human rights advocate has visited the Penitentiary Institutions in Norway, Poland, Germany, Estonia, the Netherlands and the United States and has not noticed a discriminatory attitude towards gays there. “Gays generally do not have problems in these societies, that’s why there is no such a problem in their detention facilities as well,” he notes. Arthur Sakhunts was a witness of what a discriminatory attitude a convict being kept in one of PIs in Armenia faced. “A detainee had swallowed a nail, but the staff didn’t want to transfer him to the Hospital for Convicts, as there was no separate place in the Hospital to provide him. Then they prepared a separate place and, only after that, transferred him there. This means that in health facilities, too, these people are separated from others,” expert says.

“As far as the ruling political party has a negative attitude towards gays, the situation will not change. A clear instruction should be given, that gays have the same rights as others.” says Sergey Gabrielyan, the Head of the “New Generation” Humanitarian NGO

Sergey Gabrielyan is sure, that the situation is possible to change in case of availability of two conditions simultaneously: make people aware, raise their legal awareness and render a political decision on the defense of gays’ rights. The human rights advocate reminds, that “Armenia has ratified almost all the international treaties concerning gays’ rights.”

Arthur Sakhunts is also sure, that the heads of Penitentiary Institutions may improve the living conditions of gay convicts and the attitude towards them if they wish. Sakhunts, in his turn, reminds that the heads of PIs are appointed by the RA President, personally. The experts bring as an example the change of attitude towards people suffering from AIDS: “There was a time, when everyone had an ill treatment towards those suffering from AIDS, but the authority demonstrated a clear stance and the majority of the society changed its attitude. Such a change may be also towards gays if the authorities show will,” Sergey Gabrielyan notes.

Gor — who has reentered civil life for about 10 months — has a job and doesn’t keep dark his sexual orientation: “I have told about my orientation. You may accept me as such or not, it’s up to you to decide.” Gor notes that, unlike the years spent in the detention facility, now nobody tries to have enforced sex with him. “People may not accept me, but no one will come at daytime and try to rape me…,” he says, “ I can hardly believe I’ve got out of that hell.”

“Inadequate treatement has not been recorded towards gays”: the Penitentiary Institution assures while the human rights advocates contradict.

While human rights advocates and organizations conducting monitoting in the field are trying to alarm discriminatory treatment towards gays and abuse in penitentiary institutions in Armenia, the competent authorities state: “It’s a pointless concern.” In his written letter, addresses to “Medialab”, Arsen Hambardzumyan, Deputy Head of the Penitentiary Department of the Ministry of Justice of the Republic of Armenia mentions that the RA Penitentiary Department rests upon “humanity, legality principles of equality of convicts before the law” while performing their work.

“Medialab” had twice applied in written form to Arthur Osikyan, Head of the Penitentiary Department of the Ministry of Justice of the Republic of Armenia, Major-General, for getting a permission to conduct an interview on the given topic from a representative of the Devision of Social, Psychological and Legal Affairs of the Department. Though the representatives of the competent authority refused to answer our questions face to face, but we received a written answer from the Department.

Despite the statements of the former convict and experts, the Deputy Head of Penitentiary Department thinks, that the unlawful displays by “Medialab” “have nothing to do with reality.” “Neither the Department conducting control over the application of penalties and nor the Group of Public Observers have ever recorded a case of unlawful or inadequate treatment towards detainees or convicts in relation to sexual orientation by other convicts, not to say by penitentiary servants; and this is an obvious fact proving that your concerns are pointless,” Arsen Hambardzumyan, Deputy Head of the Department, writes.

For Arthur Sakhunts, the answer Hambardzumyan gave, is, at least, strange. “This is an answer given by a person, who either has nothing to do with the penitentiary system of Armenia, or hasn’t at least once visited penitentiary institutions or even if he has, he doesn’t understand what is going on there,” Sakhunts says to “Medialab.” As an expert of the Group of Public Observers conducting public monitoring in penitentiary institutions, Sakhunts notes, that the assertion, that the Group of Observers never recorded an inadequate treatement towards gay convicts, is obviousely false, as the Head of Penitentiary Department states. “We addressed that problem in our reports. The phenomenon that a gay convict doesn’t file a complaint on the ill-treatemet against him, proves that there is such a climate of fear in the penitentiary system, that people are not sure whether after raising a question they will stay safe,” human rights advocate states.

Though Arsen Hambardzumyan assures in his answer that “pentitentiary service having chosen the way of reforms acts with transparency and the importance of the rule of law”, nevertheless, the public observer mentions, that he was “deeply disappointed” when reading his answer. “I’m really disappointed, as I find such an approach to a problem, that doesn’t objectively exist,” Saqunts says and invites the Head of the Penitentiary Institution to organise a joint visit to any PO and find out what is going on there.

Sergey Gabrielyan says that it was definitely expected that the Penitentiary Department would react critically to the gaps and situation in its structure. He notes that as human rights advocates, they always record and publish all the shortcomings hindering the protection of fundamental human rights. “Though we have many rights that comply with the principles of democracy and ideology of humanism, the enforcement of that law is still missing.”